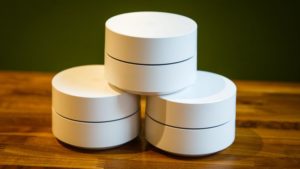 While I have been extremely pleased with the performance and reliability of the Apple wireless devices, I desired more monitoring (e.g. device bandwidth usage) and configuration options (e.g. prioritization, family access controls). I began looking into other wireless options when Apple officially discontinued their Airport Extreme/Express products in 04/2018.

Competition – I previously considered the Meraki cloud-managed wireless devices, but decided against their annual per-device subscription costs for my home installation. The Ubiquity UniFi Pro HD devices also look fantastic from a sys-admin perspective, but seem unnecessarily complex for my basic home needs. In the end, I was comparing the Google Wifi mesh devices and the Netgear Orbi mesh wireless system. I preferred the Google Wifi devices because they are all identical and interchangeable and are managed from anywhere, whereas the Netgear Orbi system uses separate primary and satellite devices and can only be managed when you are at home. If my primary Google Wifi device fails, I can use one of my other mesh devices as the primary device. I also expect Google would be more likely to innovate/upgrade the existing product.

Initial Setup – Configuration of the primary AP and two satellite APs through the Google Wifi mobile app was extremely fast and simple. Configure the satellites as wireless mesh nodes, even if you intend to hardwire them to your network! The most time consuming part was a typical sys-admin dilemma– contemplating new network names and passwords, although I could have easily used the existing network names/passwords. I was concerned that the satellite APs would not take advantage of existing network wiring, but the app visually confirmed satellite nodes were using wired connection to network after I plugged them into my existing wiring. No issues connecting a WIDE variety of devices to the wired or wireless network (e.g. TVs, game consoles, phones, tablets, computers, sensors, etc).

Wireless Speeds – Google Wifi (N300/AC1200) wireless speeds are slower than Airport Extreme (N450/AC1300) but same/better than Airport Express (N300 only). Not an issue for our day to day use since devices still have plenty of bandwidth for streaming 4K and occasionally transferring large updates/games/media, but something to be aware of if you frequently copy large files or media wirelessly to a local network server. Also note that Google Wifi has gigabit ports, while Airport Express only has a 10/100 ethernet port. When extending our wireless network with Airport Express devices, wireless clients on the Express access points were limited to the 100mbps speed of the connection back to the Airport Extreme. Some of our devices are actually seeing better wireless speeds on Google Wifi because of this issue.

Wireless Coverage – Google Wifi wireless signal is weaker than my existing Airport Extreme and Airport Express. While indoor coverage seems sufficient, I am experiencing weak signals and dropouts in outdoor areas that previously had coverage (e.g. downloading updates to vehicle in front driveway, listening to music in back yard). Extending the network with two more mesh devices will likely resolve these outdoor coverage issues for much less than I would spend on a high-end system.

Likes – Very fast and simple setup. Reasonable default settings. Ability to schedule/disable internet for individual/group of devices on primary or guest networks (e.g. kid bedtime, home concert). Allowing Guest Network to cast to specific devices on Private Network (e.g. streaming from guest mobile to home TV). Total price (less than $250 for 3 node setup on sale, no recurring charges). Extremely small form factor. Nodes are identical and interchangeable (e.g. Can easily replace failed primary AP with a satellite. Can easily expand system by adding one or more of the same devices. Can split 3 pack with family/friends who may only need 1 or 2 devices.). Satellite APs can provide ethernet bridge on two ethernet ports. Can easily monitor and manage from anywhere, including viewing real-time usage and past day/week/month usage per device.

Network Data Collection – Obviously, cloud-managed network devices have to send data to the cloud, but how is the data used? I tried to determine how much data was being collected and shared when considering products. I appreciate that Google is sensitive to this issue and has published an article entitled “Google Wifi and your privacy” that explicitly states “the Google Wifi app and your Wifi points do not track the websites you visit or collect the content of any traffic on your network“. Data that is not collected cannot be used. Google Wifi privacy policy also mentions that device MAC addresses are not collected/stored and only retrieved from your home network when requested by your Google Wifi management app.

DNS Data Collection – If you are interested in data collection, you should also think about which DNS provider you are using. Every time you visit a website, your device has to send the hostname to a DNS provider to request the website’s IP address. By default, your network will use your ISP DNS, which likely logs all requests. Some people choose to use OpenDNS and similar providers as an additional layer of protection for their network, but those providers likely log all requests as well. Be aware that Google Wifi configures your entire network to use Google DNS by default. Google DNS has a separate Privacy Statement stating they only retain usage logs for 24-48 hours and do not keep permanent usage history for your IP. If you feel that you are sharing too much information with Google, consider using Cloudflare privacy-focused DNS instead. If you want to ensure your DNS requests are not monitored or manipulated by your ISP or other man-in-the-middle, Cloudflare even supports secure/encrypted DNS queries for certain devices.

Summary – Based on my initial impressions, I am extremely pleased with the Google Wifi mesh network for the price. Overall coverage and performance is reasonable and I am very excited to have the additional monitoring and management features that were absent in my Apple wireless network. While I hesitate to send even more personal  information to the cloud, I am comfortable with Google’s current Privacy Policy.

In the end, I bet on Google over the similar-priced competition because I anticipate that Google will continue to innovate this product line by adding more monitoring/configuration/integration options as well as faster hardware that can interoperate with the current network. We’ll see if that holds true!